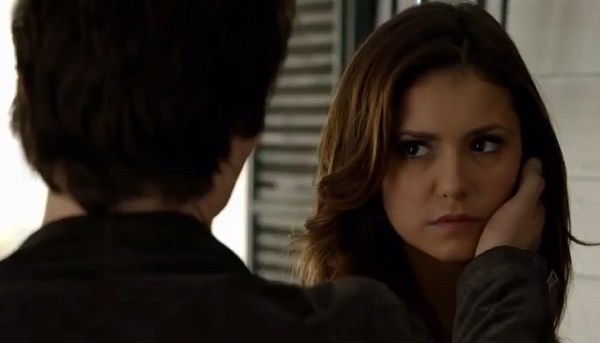 I’m seriously loving this season of The Vampire Diaries. However, I couldn’t help but cringe during Thursday night’s installment. I understand the need to build suspense and delight the audience with a few plot twists. However, when those plot twists lack logic, the quality of the storytelling becomes questionable at best. Which was my main issue when it comes to I Alone.

After he was compelled by Damon to steal the Ascendant from Jo, Alaric had no other options but to oblige. It only took some wine and Thai food to convince her girlfriend to tell him where she keeps one of her most precious possessions. In her underwear drawer of course, as any classy lady would. So he grabs it and hands it over to Damon, despite Stefan disapproval of his brother’s shady ways. For the record, this was one of the least devilish things Damon has ever done, and for the purest of reasons, so I didn’t quite get why everyone was hating on him so bad. I guess people are just used to criticize his behavior, mainly due to his bad track record, so I’ll let this slide.

Then, with a little help from Liv, Damon and Elena returned to the ‘90s to recover Bonnie. They managed to get her on the phone, find out that she’s on her way over from Portland, and set up a rendezvous for… over 6 hours later. So instead of offering to meet somewhere halfway, you advise her not to take restroom breaks anymore and rush over to Mystic Falls, because you’re too lazy to drive? Call me crazy, but if I found out that my formerly presumed dead BFF is close by, I would hotwire a car immediately and rush to be by her side as soon as possible. Especially when you only have 7 hours to make her swallow a vile of blood in order to bring her back to the realm of the living. What if she has a flat tire? Or runs out of gas? From what I understood, they didn’t have to be in a particular place for the spell to work. Isn’t that why Damon and Elena were casually hanging out on the Gilberts’ front porch instead of in the cemetery? I’m deeply confused. Maybe the TVD writers will be kind enough to explain this in a future episode, so I no longer have to lose sleep trying to wrap my head over Delena’s unreasonable decisions.

Anyway, with nothing to do but time to kill before Bonnie’s arrival, the ex-lovers enjoyed some pancakes, fought over the fact that Damon put Jo’s life in danger, and reconciled after the older Salvatore basically admitted Bonnie is now his BFF as well. At least we got Elena to confess that she’s sorry she let Alaric erase her memories. That was touching. Before they could embark in further adventures though, Elena and Damon were pulled back into the present by a frightened Liv, who just had a close encounter with her psycho brother. Oops. Talk about bad timing.

+ Kai makes it back into the present, and enjoys everything 2015 has to offer – which apparently consists of skinny jeans, smartphones, and Twitter. (You can actually follow him on the social platform. You won’t be sorry, I promise. Whoever manages this Twitter account is a funny genius.) He also goes after Liv, who misses plenty of obvious hints before figuring out who he is. Luckily, Tyler is there to have her back. So after failing to kill her, he casually stumbles upon Damon and Elena, and tortures both of them a bit, destroying the Ascendant in the process. Classic Kai. I hope he stays around at least until the end of the season.

+ The Salvatore’s estranged relative finally gets a face-to-face with Stefan, but is shocked to find out that he actually knows Sarah Salvatore, and easily figures out that she’s an unskilled con artist. Enzo kills her off, I didn’t quite understand why. Caring about the truth doesn’t seem like a valid reason to break someone’s neck. A bit boring, in my humble opinion, but if the real Sarah actually shows up in the near future, I’ll retract my words. Speaking of Enzo, he was pretty pointless this episode, although he was sweet when referring to Caroline as the one girl who can honestly do no harm. It seems like this character currently lacks direction, so I’m hoping he’ll get some sort of purpose soon.

+ Jeremy is all better now, except for the fact that Elena told him the truth about Bonnie and messed him up all over again. Hey, that’s what big sisters are for, I hear. Even though he acted all tough and unwilling to rely on false hope, he was secretly longing Delena’s crazy plan would work. Probably that’s why he was so eager to go back to his drunken way before Matt recruit him on his mission to kill Enzo. I wonder how that will go.

+ The episode ended with Kai crashing on Tyler’s armchair, threatening his life, and then proposing a deal that would keep Liv safe. Which means that he either wants to merge with Jo and kill her, or he wants to kill Luke, who’s spending his last days as an independent individual enjoying the company of his boyfriend. I’m guessing the first, because we have the midseason finale next week. I’m sure we’re all craving some serious drama to hold us off until 2015.

All in all, a decent episode, meant to prepare us for what’s about to come. What are your thoughts? Did you appreciate Jeremy’s remark about how the volleyball team would enjoy to see him pantsless? Feel free to share your thoughts below.

Meanwhile, looking forward to next week’s installment. It seems like an action-packed one.