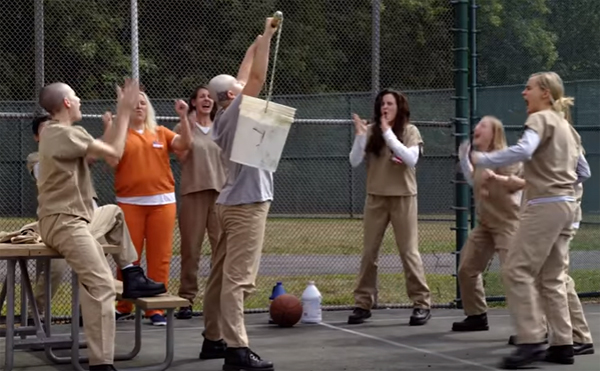 To summarize what many are saying about the latest season of Orange is the New Black or OITNB, let’s turn to one Vox.com reviewer:

…incredibly bleak. It was so brutally hard to watch sometimes that knots would form in my stomach and stay for hours — and yet I couldn’t stop. This latest set of episodes is a powerful reminder of why this show was, and remains, so hypnotizing.

Enough said? Maybe not, and it is important to understand more about this surprising hit. From the powerful opening montage with its haunting theme song by Regina Spektor, fans tend to be hooked straight away. However, one of the things that viewers may forget is the fact that from its theme song to its individual characters and episodes, Orange Is the New Black is about one thing – the willpower it takes to survive confinement.

And season four is making that incredibly clear. Digging deeper than other seasons, it is exploring power struggles from every conceivable angle, with the biggest question being just who should have the power inside the prison walls.

Taking its cues from reality, including the look at a prison shifting from state control to a for-profit entity, it shows how miserable and failed our current prison system has become. Overcrowding, cheap workers, poorly planned accommodation, and the tensions that build from such clashing values serve as the spine of the season’s storylines.

In the midst of this major shift, viewers had to track two power struggles – one at the administrative level and the other at the prisoner level. The prisoners deal with constant racial strife, with classic color lines making life a misery. Victimization at the hands of guards, another element pulled from real life, continues in the narrative, as does the horror of solitary confinement techniques. The privileged class makes an appearance, causing even more strife and conflict and yet this season builds on the tension between inmates and guards the most.

As a reviewer explained:

…new Litchfield marching orders become never thinking of the prisoners as people but rather as faceless criminals who deserve nothing but the walls surrounding them.

Prisons as business alter the entire dynamic of real-world settings, and it has greatly changed the entire “vibe” of Orange is the New Black too. In the name of saving money and boosting profit margins, administrators make fatally flawed choices or create systems in which the abuse of power creates human suffering at unprecedented levels. What is everyone saying about the fourth season of the show? It is dark, and it is startlingly realistic. It is a revealing season, allowing fans to get to know characters a bit better than ever before, and yet the sense of confinement is the strongest most have ever experienced. Trapped and fighting for any sense of personal space, freedom or individuality, the main characters are much less about entertainment this season, and far more realistic.