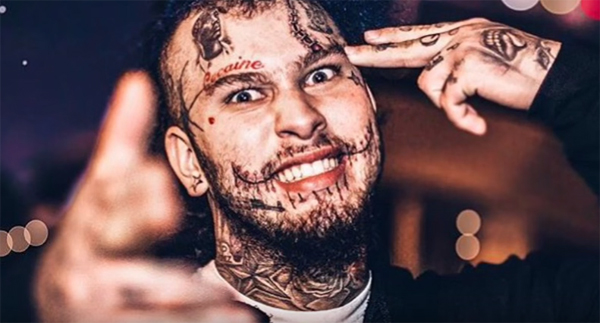 Stitches real name is Phillip Katsabanis and he was born on July 17, 1995 in Miami, Florida. Many people describe him as being the craziest rapper alive because of the many tattoos in his face and his hyper personality. He is controversial to say the least and quick to start a physical fight. Lets start by taking a look at his many tattoos. As you may already guest it, his name stitches is derived from the tattoos on his body in a stitched like pattern. The ones from his mouth to cheek looks like Joker in The Batman movie.

His describes himself as a gangster rapper and it certainly comes across in his music. His lyrics are mostly about guns, drugs, sex and money. He was know as Lil Phil before he adapted that name Stitches. His first album was released on November 24, 2015, entitled “For Drug Dealers Only” and he had released a mixed tape a year before that, entitled “No Snitching Is My Statement”.

Girlfriend / Spouse:
Stitches (rapper) and Erica Duarte, a judicial assistant, were married for two years up 2015. They had two children, Children: Rocco Katsabanis and Rex Katsabanis.
He was also rumored to be dating Kylie Jenner in 2015.

Physical Distinctive Features:
Tattoos all over his face and body.

Style, makeup, Dress and hair style:
He has a mohawk hairstyle.

Plastic Surgery:
He may need plastic surgery to remove those tattoos from his face if he decides to do so in the future.

List of Facts / Trivia:
1. He ha three mixed tapes, No Snitching Is My Statement (2014), Brick Bible (2015) and Supply & Demand (2015). He also have two studio albums, For Drug Dealers Only (2015) and Tales Of A Drug Lord (2016).
2. When he was known as Lil Phill, he use to battle rap at different schools.
3. His family is mixed with Cuban and Greek descent. He has three brothers.
4. Stitches and The Game had a public beef and it climaxed into a fight outside a night club after spit on The Game car. He was knocked out by Wack 100 during the altercation.
5. His song: Stitches – One Million Dimes is one his most popular in 2016.
6. In February of 2016 Stitches was turned down by a celebrity tattoo artist in the O.C. The artist said he didn’t want to be associated with what the rapper represents.