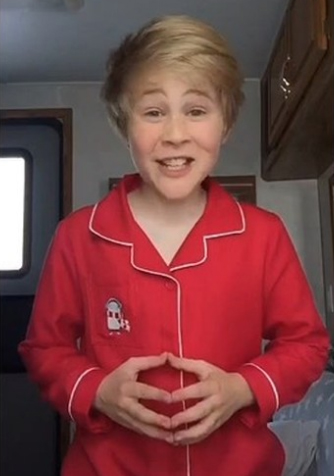 Casey Simpson is an an American actor, well known for his role in Nicky, Ricky, Dicky & Dawn (2014), Despicable Me 2 (2013) and We Make That Lemonade (2014). He was born on April 6, 2004 in California and got his break through as an actor in the Nickelodeon series. he started acting when he was only three years old with his first role on Frank TV in the comedy skit called Santa. He has also made some commercials, guest appearances, and short films. He was on Frank TV, a Walgreens Easter Commercial and Lost. He is also very active on the musical.ly app and post to his YouTube channel sometimes.

He is friends with Mackenzie Ziegler, Gianna Gomez and Jillian Spaeder. They make videos together sometimes. He is one of the rising stars on musical.ly with more 2 million fans. He upload a new video to musical.ly almost everyday. He has more than 138 musicals and 47 million hearts.

Physical Distinctive Features:
He has blue eyes and a very beautiful smile.

Style, makeup, Dress and hair style:
His dress style in neat and modern.

Well Known For:
Movies and his vies on musical.ly.

List of Facts / Trivia:
1. He was joined by Mace Coronel, Aidan Gallagher and Lizzy Greene on Nicky, Ricky, Dicky & Dawn, Nickelodeon sitcom with the first episode being on September 13, 2014.
2. Simpson was nominated for the Kids’ Choice Award for Favorite Male TV Star—Kids’ Show.
3. He was also in the Lifetime television movie called Five.
4. Casey Simpson (Voice) is among the cast members for Despicable Me 2 (2013). It’s not clear which character he voiced as because his credit is listed as Additional Voices (voice).