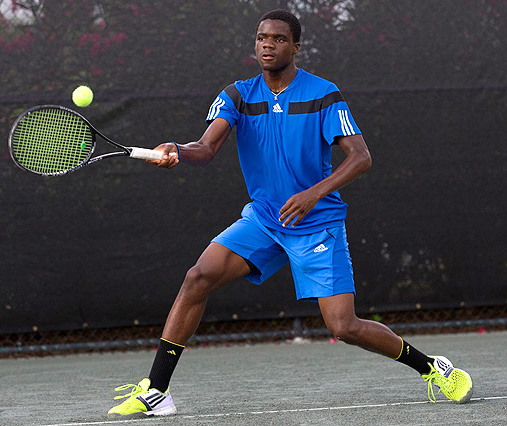 Frances Tiafoe became the youngest tennis star in boys’ singles champion to win the Orange Bowl at only 15 years old. His early feats led many to believe that he will be a great international champion someday. Frances lived with his parents in College Park, Maryland and at the age of four began training at JTCC. It so happen that his father was a worker who help to build the Junior Tennis Champions Center and was later hired as a custodian. This helped to open the door for Frances to the world of tennis. At eight years old he was Misha Kouznetsov, a tennis professional at the center, stated to train and mentor him.

His parents both emigrated from Sierra Leone in West Africa and he has a twin brother named Franklin.

Dating History Girlfriend / Spouse:
Tiafoe is dating Ayan Broomfield, who is Canadian tennis player. Her Height is 5′ 7″ she is a year older that Tiafoe.

Physical Distinctive Features:
He is a very physically fit athlete like most professional tennis players. He is tall and has a big smile.

List of Facts / Trivia:
1. Francis became the first tennis player to sign with Wajid Syed of Jay-Z’s Roc Nation agency.
2. He fan of NBA star Kevin Durant of Oklahoma City Thunder and Washington Redskins (NFL).
3. At 18 years old Frances Tiafoe battled U.S. veteran John Isner at the US Open and even though he lost the game, he gained much respect with a final score of 3-6, 4-6, 7-6 (7-5), 6-2, 7-6 (7-3). The match lasted 3 hours, 27 minutes showing that Tiaoe will be a force to be recon with in the future.
4. Francis spend most of his time in Boca Raton, FL, USA and is coached by Jose Higueras. He is right handed and has a mean two-Handed Backhand that can match the best of the best.
5. Bill Ackman, a Hedge fund CEO at Pershing Square Capital, sponsored Francis when he was 16 years old.