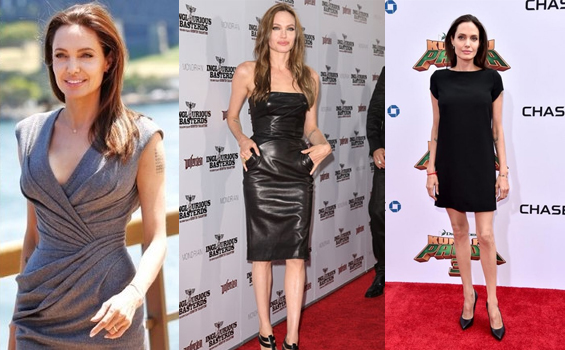 It wouldn’t be totally inaccurate to say that Angelina Jolie was born into fame. The daughter of actor Jon Voight, Jolie began her career in the 1990s when she enjoyed a series of small film roles. The full-lipped beauty, however, really burst onto the scene when she was cast as Lara Croft in the “Tomb Raider” movies, based upon the popular video game series of the same name. From there, Jolie’s career took off and a string of successful movies followed, like “Mr. & Mrs. Smith”, “Salt”, and “Kung Fu Panda”. A love for humanitarian work in distressed countries also followed, and Jolie’s husband, Brad Pitt, has joined this crusade – including the couple adopting three children, one from Ethiopia, one from Vietnam, and one from Cambodia.

Fame always comes with a flood of attention, and all eyes have certainly been on the actress lately – but this time for a reason other than her talent or charity work. In early 2016 Jolie walked the red carpet at the “Kung Fu Panda 3” premiere (she voices Tigress) and her frail, stick-thin arms and legs were painfully apparent. Weight loss is nothing new for the actress – she admittedly lost a significant amount after her mother’s death in 2007, and a family friend has even claimed that the star ended up in the hospital for anorexia as a teenager.

Rumors are swirling about Angelina’s current weight and health, and have even spawned questions about whether a divorce is impending due to Brad’s concerns over the issue. Alas, they are just rumors, but the photos of the actress are blatantly disturbing – only time will tell whether Jolie is suffering from an eating disorder.

As famous as her weight loss is Jolie’s extensive tattoo collection. She’s thought to have at least 20 of the body decorations, many in the yantra style – a specific method utilizing a blend of hand-etching along with Buddhist prayers that are believed to imbue the bearer with powers like luck, healing, and protection against evil. Not surprisingly, the Jolie-Pitt children are the inspiration for some of the body art – such as the list of coordinates on her left arm which represent the locations of her children’s births, and the Cambodian design on her left shoulder blade that Jolie got upon son Maddox’s adoption. 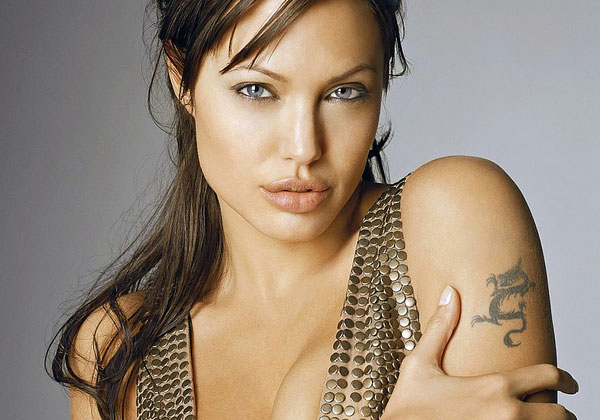 Angelina’s latest artwork covers a large area of her upper back and contains designs representing Buddhist blessings for peace, love, and a prosperous life. She also sports a large Latin cross on her hip, tribal tattoos, and a Bengal tiger. Among all of the ink over Jolie’s body, however, perhaps the most poignant are the smallest – a letter “h” on the inside of her wrist for her brother James Haven (to whom she is very close) and the letter “m” on her palm, for her beloved, late mother.

Whatever the truth regarding Angelina’s weight loss, rumors of anorexia, and whispers of marital problems, there doesn’t appear to be any end in sight for fan and media fascination with the actress/humanitarian activist.