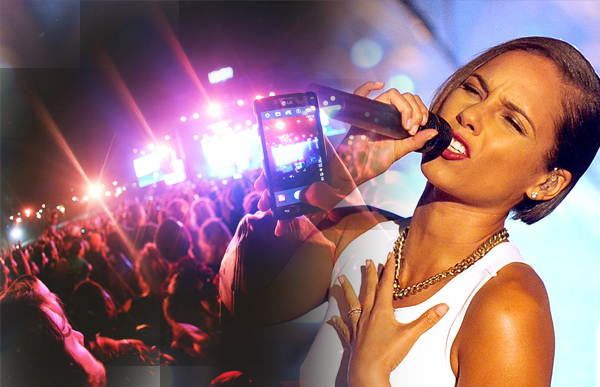 Piracy, bootlegging…these are old-school terms for the days when some daring fool would enter a concert venue with recording equipment hidden on them. They would then record the concert and make many copies of the tapes to sell through illegal channels (such as record shops – do you remember those?).

Today, a lot of tiny little mobile devices offer us sophisticated recording systems, and even advanced video capabilities. This is why some artists have started to enforce a no cell phone policy at their concerts. Interestingly enough, there are still some bands that encourage people to make recordings (Phish and Pearl Jam are two) and share them freely.

So, it is it only that artists fear piracy or bootlegging and the loss of revenue that this would cause? No. There is also the vanity issue.

Team Beyoncé and Beyond

A Digital Trends article dating all of the way back to 2013 showed a photograph that was seen by “Team Beyoncé” after it was taken by a cell phone user at one of her shows. The image is…well…unflattering to say the least, and her team wanted any similar future shots to be impossible.

The explanation given by Beyoncé, along with a list of other artists instituting similar bans was this: “They argue that it takes away the enjoyment of being at a live performance, as well as being a nuisance to the performers and other concertgoers.”

Maybe you have seen the recent footage of Adele requesting someone in the crowd put down the phone, but we’ve also seen non-musical stars shame people for the use of mobile devices. Jennifer Lawrence earned unfavorable publicity when she shamed a reporter who was busy using his device during an interview (only to discover her harassment was unwarranted because the journalist was trying to translate a question to ask her!)

So, why do people like the late Prince, Alicia Keys, She & Him and so many others request or flat out deny the cameras.

Most hold fast to the desire for everyone to enjoy the show in real time, appreciate the efforts that artists and their teams have made to create on-stage spectacles, and as the band the Savages stated:

Our goal is to discover better ways of living and experiencing music. We believe that the use of phones to film and take pictures during a gig prevents all of us from totally immersing ourselves. Let’s make this evening special. Silence your phones.

And if you do show up with a phone? Some venues have unusual lockable bags that prevent you from using the device during the show. You are given the bag and you are watched as you drop it into the pouch. Then, after the show, you can have it unlocked.

While you might be convinced it is all about the money, there are many who insist it is not. Instead, many bands believe that they need to combat concertgoers who:
opt to watch their concerts through their mobile viewfinders, dividing fans into two camps: those who believe the over-prevalence of phones at shows is ruining the communal live music experience for everyone, and those who think, as paying customers, they should have the right to watch the show any way they see fit.

The argument is not going away soon, but for now, you should know that many stars are forbidding the devices, and you may want to just leave them at home and enjoy the show.