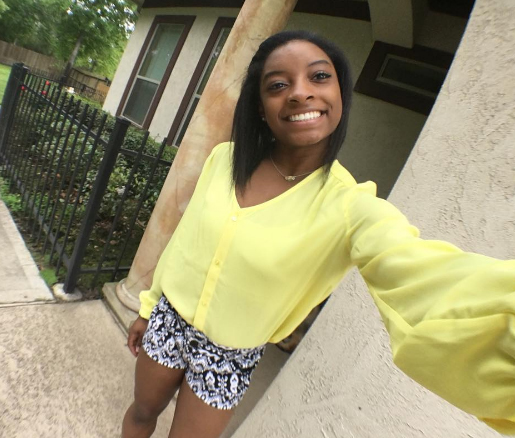 Biles was adopted by her grandfather Ron Biles and his wife, Nellie. Her mother was a drug addict who was unable to care for her kids. HOw did she become a gymnast? The story goes, she was suppose to attend a day care field trip one day but it was raining. The plan was changed to the kids going to Bannon’s Gymnastix in Houston, TX. As you can see from the success of of career so far, it was a fortunate turn of event. Her hard work has paid or and made her one of the most prominent Women’s Artistic gymnast in the word.

Educational Background:
High School: The Redd School (private school in Houston, TX)
University / College: She was suppose to attend University of California, Los Angeles, but ended up being homes schooled.

Association and Friends.
Biles is associated with Gabby Douglas,

Boyfriend / Spouse:
We do not have any information on her dating history of if she is in a relationship. She seem to be single at the moment.

Physical Distinctive Features:
She is short, physically fit and athletic.

List of Facts / Trivia:
1. Simone has a sister name Adria Biles who is also a gymnast.
2. Biles was on the on Ellen DeGeneres Show and the Today Show.
3. She has graced the cover of magazines like Teen Vogue.
4. Her routine involves the All-Around, Floor Exercise, Balance Beam, Uneven Bars, Vault and Team.
5. Biles is among the seven women who have qualified for U.S. women 2016 Olympic Games. They are “Brenna Dowell of Odessa, Mo./GAGE; Madison Kocian of Dallas/WOGA; Maggie Nichols of Little Canada, Minn./Twin City Twisters; Aly Raisman of Needham, Mass./Brestyan’s American Gymnastics; Biles; Douglas; and MyKayla Skinner of Gilbert, Ariz./Desert Lights, who is the alternate.” Source USAGYM.ORG.
6. After a historic performance at the 2015 World Championships, Biles also partnered with Nike.