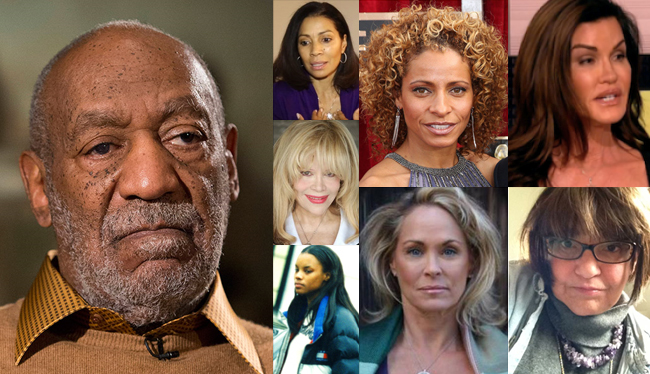 If you haven’t been living under a rock for the past few months, you certainly heard about the scandal surrounding Bill Cosby. The 77-year old comedian is accused of sexually assaulting numerous women, with alleged incidents dating back to 1965. Although these accusations ended up costing Cosby his new NBC show and his Netflix special, they didn’t lead to criminal charges yet. However, the victims’ tales of assault bear similarities; taken together, the allegations paint a truly disturbing picture. We’ve gathered them all below.

Kristina Ruehli, now 71, claimed that Cosby sexually assaulted her when she was a 22-year-old secretary at a talent agency in Beverly Hills. You can read the whole story in Philadelphia Magazine, who interviewed the now grandmother of eight. According to Ruehli, the comedian invited her to a party held at his home. When she got there, though, it turns out she was the only guest. She claims to have had a cocktail with Cosby and suddenly pass out. When she woke up, she told the magazine that Cosby tried to force her to perform oral sex on him. The incident would have taken place in 1965.

Carla Ferrigno opened up about an alleged incident that took place in 1967 on KFI-AM’s John and Ken Show on November 20. She claims that he was invited on a double date with Cosby and his wife. After that they ended up at Cosby’s home, where the comedian allegedly kissed her roughly despite her vehement protests.

Joan Tarshis went public about a month ago, claiming that Cosby raped her twice back in 1969, when she was a 19-year old comedy writer. According to her story, the comedian asked her to help create material for his sitcom The Bill Cosby Show.

Valentino, a former Playboy playmate, claimed that Cosby forced her to perform oral sex on him and raped her back in 1970. The reveal was made in an interview for The Washington Post, where you can read the entire tale of the incident.

According to the actress, Cosby forced her to perform oral sex on him in the dressing room of Johnny Carson’s Tonight Show. The incident would have happened in 1971.

Helen Hayes made her accusations in a press conference at the beginning of December, claiming that Cosby approached her from behind, reached over her shoulder and grabbed her right breast. “His behavior was like that of a predator,” Hayes said during the press conference. The incident would have occurred in 1973, at Clint Eastwood’s Celebrity Tennis Tournament.

Huth took her accusations to court. She filed a suit against Cosby in which she claims that she first met the comedian back in 1974, when she was 15. Cosby took her to a party at the Playboy Mansion where he allegedly sexually assaulted her by taking her hand and making her perform a sex act on him. Los Angeles prosecutors have declined to file any charges.

Green publicly shared her story on the Today show in 2005. She claims the incident happened in 1975. Cosby allegedly gave her pills that would help with her flu symptoms, but instead almost knocked her out. Green said that Cosby took her back to her home, undressed her, and began groping her. She also wrote an op-ed for ETonline in November.

Serignese, now 57, told People magazine that she met Cosby in Las Vegas, in 1976, after one of his stand-up shows, when she was 19 years old. Cosby allegedly offered her a powerful sedative-hypnotic drug and then pressured her into agreeing to engage in sexual activity.

Emmons told TMZ that Cosby gave her a pill that was supposedly for her headache, but caused her to pass out instead. She claims that she woke up in bed with one of Cosby’s friends who had attempted to hit on her earlier that night. The incident would have happened in the late ‘70s, when Emmons ran a number of comedy clubs.

Dickinson claims Cosby invited her to travel to Lake Tahoe to discuss a possible job opportunity back in 1982, after she got out of rehab. After having dinner, Cosby allegedly gave her a pill to help with menstrual cramps. The pill caused her to pass out. According to Dickinson, Cosby then proceeded to sexually assault her.

Renita Chaney Hill claims she began a relationship with the comedian in 1982, when she was just 15 years old. According to Hill, Cosby allegedly served her drinks that caused her to lose her consciousness, and she would always wake up in bed. She claims she doesn’t know if Cosby raped her and that she continued to see him until she was 19.

According to Ferrier, she had a months-long consensual affair with Cosby in the early ‘80s. After it ended, she claims that he sexually assaulted her in his dressing room. He allegedly gave her a cup of coffee that caused her to black out.

Johnson claims she was drugged and almost attacked by Cosby after she auditioned for a role on The Cosby Show in the mid ‘80s. She wrote an op-ed for Vanity Fair detailing the incident.

Bowman wrote an article for The Washington Post in November, detailing her struggles to get people to take her story seriously. According to her, Cosby gain her trust by acting like a mentor, back in 1986, before sexually assaulting her on multiple occasions.

Jones claims he met Cosby in 1986, when she was 17 and working as a model. Her story is similar to Bowman’s – he acted like a father figure to gain her trust and then allegedly tried to sexually assault her.

Chelan, who decided not to make her last name public, also claims to have met Cosby in 1986, when she was 17 and as aspiring model. She says that the actor promised to introduce her to modeling agency reps. However, when she arrived at his hotel room, he allegedly gave her a blue pill and sexually assaulted her.

According to Allison, Cosby began contacting her in the late 1980s, offering to mentor her. She claims that she accepted a dinner invitation to Cosby’s home, where he served her a glass of wine. After she had the wine, she started feeling dizzy and collapsed. Later that night, the comedian allegedly assaulted her.

Leslie claims Cosby tried to sexually assault her in 1992, in Las Vegas. However, when she refused to drink from the cocktail he prepared, he allegedly kicked her out of his hotel room.

Michelle Hurd claimed in a Facebook post that Cosby was inappropriate with her when she had a small role in The Cosby Mysteries. According to her, Cosby also invited her to his home, but she declined.

Covington, an actress on the sitcom Cosby, filed a police report against the comedian back in 2000 accusing him of making unwanted sexual advances toward her. According to the New York Post, cops never questioned or charged the comedian.

Constand claims that Cosby approached her by offering to be her mentor. She says she met with the actor at his home in Pennsylvania and that he gave her pills to ease her anxiety. After allegedly drugging her, Constand claims that Cosby sexually assaulted her. She filed civil charges against Cosby in 2005. The case was settled out of court for an unspecified amount in November 2006.